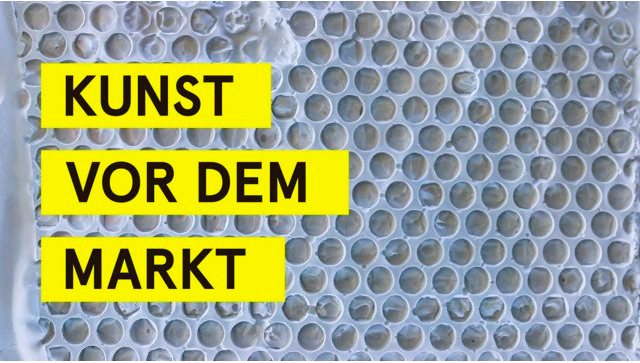 „KUNST VOR DEM MARKT“ (“art before the market”) brings together a selection of young, high-quality, contemporary art that can be purchased at a competitive price. There are works from various fields on display, such as painting, graphics, photography, installation, performance and new media. The exhibition is complemented by a “virtual sale space”, which works just like a picture gallery and allows the art works to be viewed at any time.
Das weisse haus will be a platform that let’s you expand your collection – or acquire a work of contemporary art production for the first time. With your purchase, you not only support the participating artists, but also the non profit art association, das weisse haus, which uses the proceeds to finance part of its program. The economic situation of artists who have no direct access to the art market will be discussed from different perspectives on 03.12.2019 during a round table discussion. We look forward to seeing you!

Performances at the opening:
„Auffallend Unauffällig” (“distinctly indistinct”) by Lisa Großkopf
The perfomance revolves around the aspect of (self-) precarization and the current trend towards self-optimization. Lisa Grosskopf succeeds in drawing attention to the ambivalent relationship between artistic and non-artistic work.

In the frame of the VIENNA ART WEEK 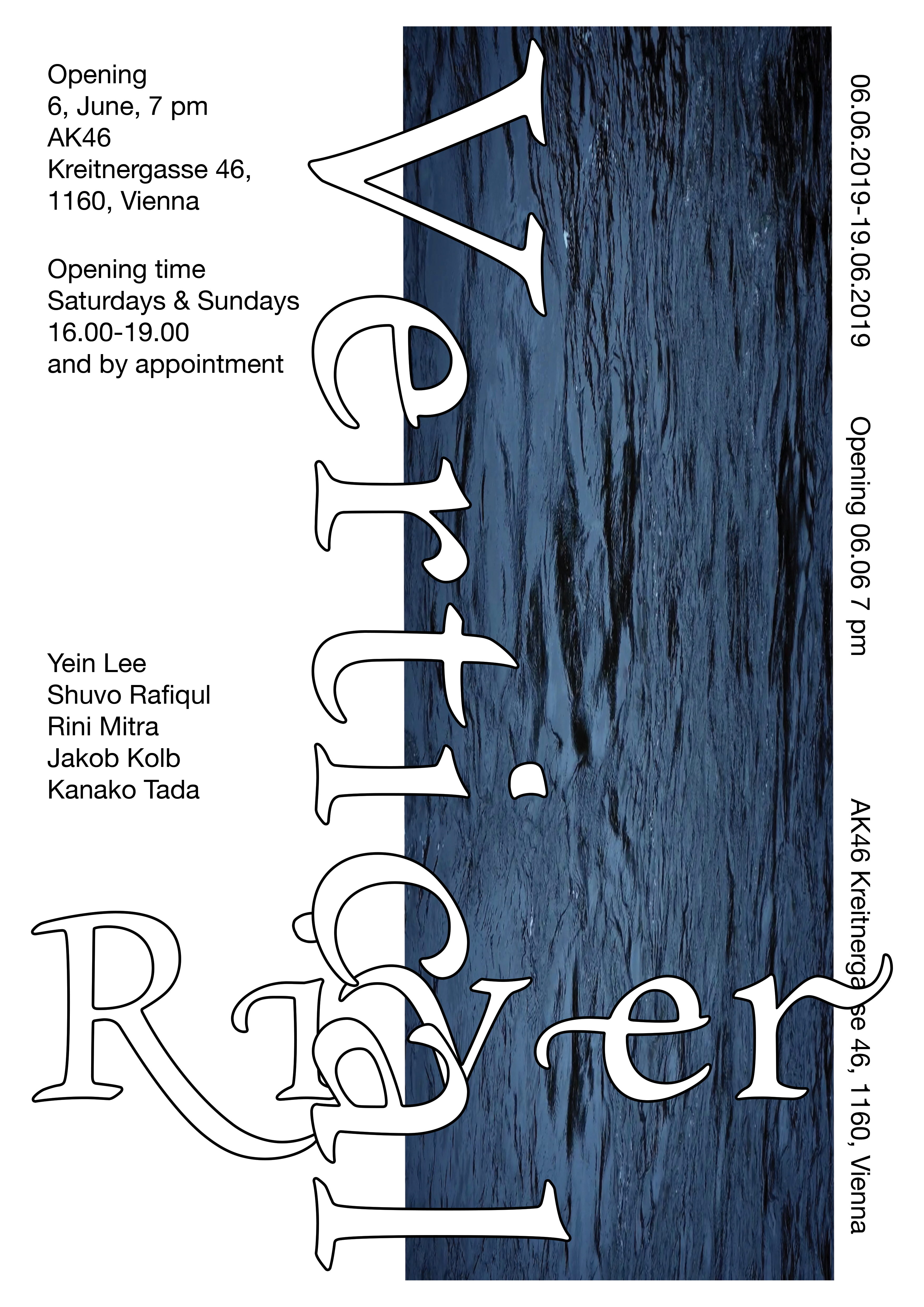 AK46 is pleased to invite you to the opening of the exhibition <Vertical River> on Thursday 6 June at 7 pm. For the first exhibition at AK46, artists Yein Lee, Shuvo Rafiqul, Rini Mitra, Jakob Kolb, Kanako Tada will present installation, drawing, painting, and sculpture.

The exhibition <Vertical River> takes place at AK46, Kreitnergasse 46, 1160, Vienna and it is curated by Kanako Tada.

As for the action itself becoming one genre, sculptures and paintings stand on the same horizon. Are ‘sculptors’ and ‘painters’ a type of artisans profession, do they have a possibility to subvert, on the brink of defeat, the art scenario that comes by a retroactive artist inhibition?

“Vertical River” does an overturning such a symmetry story.
Artist’s strategy with taking the position between a sculptor and a painter should be over. In a word, “Vertical River” is beginning of the struggle and the resistance to a genre. The artists heave up “Vertical River” to press forward a discourse which has been trailed in only about mediums and styles.

In his drawing “Nude Seen From Behind, Arms Raised”(n.d), Auguste Rodin’s frameworks engage with paper work and sculpture to depict a dystopian world being developed.

Yein lee’s work, an organism, is more inorganic than apparatus. The stuffed creatures also come back like zombies not to accept any identity other than ‘being’. Just like the sculptor Matthew Monahan who mentioned “iconography images of the disaster”, stereotype corpses and bronze statues are mingled.

She deliberately internalizes a body of a painter, anyhow accomplishing her appropriate persona as a painter and the traces of painter figure. Such methods with her physicality lead a critic to a natural awareness of her entering point to art as a painter.

The statue looks like it is crying in the rain. Our hypocrisy slightly brings such a silent narrative. Her work dissolves our artificial imagination. The fragments do not try to reunion anymore, just floating on the water.

Steps go fast, the elevator is just a right size for the sculpture and the members who adopt to carry it. Shuvo Rafiqul ’s “Transport” (2019) is a foremost work of his new series.
There is nothing to vain in the draft that collapses and builds again. It can be destroyed, because we have already an innovated upshot once. All his decisions address a respect to an artist’ limitation. Lives die after they born.Concurrently,artworks would have been transported-displayed-preserved, for example Kurt Schwitters(1887- 1948) innovated “Merzbau”(1933) which no longer exists. However, “Transport” is here, involving some stabilities by attempting reconstructions. In order to be autonomous as a sculpture, it ought to fulfill the role of an architect.

The artist’s autonomy also helps to carry this work to “Vertical River”. A city is an over-all of paintings when flying birds look down at. “Transport” has an interactive relationship with the city, so it’s a transformational white lines and gaps between sites from the sky.

His work turns audience into witnesses, in doing so it preserves the situation itself by capturing an act of tightening and building. Artists and museums function as travelers.
Audience is educated to enjoy an invisible situation. However, “Transport” continues being as a sculpture.

Fragments of black-and-white images, like bullets left on the wall, are the evidence that we stay in the ruin, as we try to keep away from the drama in the museum.

Rini Mitra‘s five drawings “black line”(2019) consist of white cardboards. It is a minimal gesture with a simple outline to build up circumstances that bodies and objects are interconnected. And the lines are likely floating from the paper, as a string is laid. The lines are trying to connect to the next room.
It reminds us of Julian Schnabel’s “The Diving Bell and the Butterfly”(2007). A main character communicates only through blinks because of his Jean-Dominique Bauby locked-in syndrome.

He has been trapped in his body as a container. We assume our subjectivity only exists in our body, but her work suggests that ourselves are drifting in our environment. She expands her realization through her artist body.

Rini Mitra collects a light refracted through every angle to design a solid figure. Her gaze, as an apparatus, scans a situation. Her practice presents the equality of body and humanity.

Jakob Kolb achieves the rituals that objects and materials narrate, to overcome a rational dichotomy. Mimesis gets entangled with his concept. There are his flourish ways of breaking, dissolving and tearing, which are construction/deconstruction in a way. The fragments scatter from high and low, stepping from an image of organic and inorganic across a stream.

Kanako Tada’s “daily necessities”(2019) embodies an intersectional exchange between art and decoration.
Her idea is fundamental; daily tools or ready-mades come up to art, vise-versa art turns into a daily or environmental decoration. Rather, such an exchange is a natural liquidity. “daily necessities” draws her experience as a painter, making her represent how we treat ego which belongs to our labor, ideality, and absent/present.
There are two organizations: pieces of mosaic in front of the sink; pieces on the wall in the exhibition space. They are subtly looking around, breathing, and coexisting with all the artworks in the space.

Yein Lee was born 1988 in S.Korea, hold Bachelor of Fine Art at Hongik University and she is studying at the Academy of Fine Arts Vienna. Her artistic and theoretical work focuses on hybrid bodies between human and inhuman as metamorphic others. Her artistic work has been shown a.o. at Franz-Josef-Kai3, Schauraum Spektakel, Gallery 5020, MMIII Kunstverein, Hfbk Gallery, Hinterconti in Hamburg, Untitled Space Gallery in Shanghai, Gallery Gaia, Museum of Hongik in Seoul, S.Korea. She lives and works in Vienna. www.yeinlee.com

Shuvo Rafiqul ( b. 1982, Dhaka ) propels his artistic sensitivity forward through the mediums of Painting, video art, collages, photography, and installation. His work mainly focuses on the ontological influence of time and the evolution of human behavior, looking with concern on the policies and the politics of art’s language. His video works represent unspoken or non-communicative thoughts and theories through sudden cuts, pauses, and juxtaposed editing. His Paintings, drawings, and collage have an identical effect on the viewers. He studied sculpture at the Faculty of Fine Arts, University of Dhaka but broke through academic barriers creating his own artistic language. He is the founder of the alternative artist initiative OGCJM. He currently lives and works in Vienna. https://www.shuvorafiqul.com

Rini Mitra (b1984, Jamalpur, Bangladesh) studied at the Fine Arts Institute at the University of Dhaka and currently studying Contextual Painting at the Academy of Fine Arts Vienna. Rini Mitra‘s works emerge from her own self-understanding which eventually reveals her surroundings. In her paintings, she describes the power of the human body and discovers the relation of it’s inside and outside. She is in constant discussion with what is (non)visually present and absent. https://rinimitra.wixsite.com/rini

Jakob Kolb was born in Deutschlandsberg, Austria on 24.05. 1992. From 2010 until 2017 he lived in Barcelona where he studied Fine Arts. Since 2017 he studies painting at the Academy of Fine Arts Vienna. Proceeding a musical career as well as producing sculptural & installative works he often exchanges narratives and working methods between media. www.jakobkolb.com

Kanako Tada was born in Hiroshima, Japan in 1989. She is a painter, earned her MA in 2015 from Musashino Art University in Tokyo and enrolled in contextual painting, prof. Ashley Scheirl at Academy of Fine Arts, Vienna in 2017. In 2010, Kanako began to paint figurative- portrait in oil on canvas. Her works can see a continuation of the time, tracing her attempts to deconstruct the form and thus to internalize them into her own. Kanako’s work “repeating is love”(2019) has exhibited Parallax Trading at Das Weisse Haus in Vienna (2019), “from the mountain”(2018) at IN WITH THE NEW at VBKÖ in Vienna(2018),Art Center Ongoing in Tokyo(2014) and railroad siding2015(引込線2015)in Tokorozawa-city,Japan. https://tadakanako.net

The group exhibition “Parallax Trading” presents artists based in Austria and Japan whose practices examines the formation of cultural identity, invisible boundaries, and social frameworks such as nationality, race, and gender. Using various mediums including video, photography, installation, and performance, the artists explore the current social situations by interweaving historical fragments to create a potential new narrative, trace the personal stories and memory of a place, and transform existing structures to seek new forms of expression. In doing so, the exhibition unfolds various aspects of relationality that have been shaped through the turbulence of modern history. On the one hand, an imagination of the unknown creates a fantasy, myth, or stereotype, on the other, the imagination allows us to undo dominant norms and to retell stories, ultimately to generate multiple interpretations. The transmission of narratives and knowledge keeps our perspectives vibrant and dynamic.

The title of the exhibition refers metaphorically to diplomatic relations. Trading has been constructing the complexities of today’s world by circulating capitals – commodities, labour, as well as knowledge. In the backdrop of the world of migration, cultural identification may no longer be articulated through such nation states. Diverse individuals and groups coexist within society, and dynamics of cultural encounters shape the multiple identities of a place. However, a normative production of knowledge repeatedly creates a subjective filter that attempts to identify any kinds of groups. With such changing constructs, how can we communicate with each other, and how can we stand on common ground?

The exhibition is planned on the occasion of the 150 years of diplomatic relations between Austria and Japan.